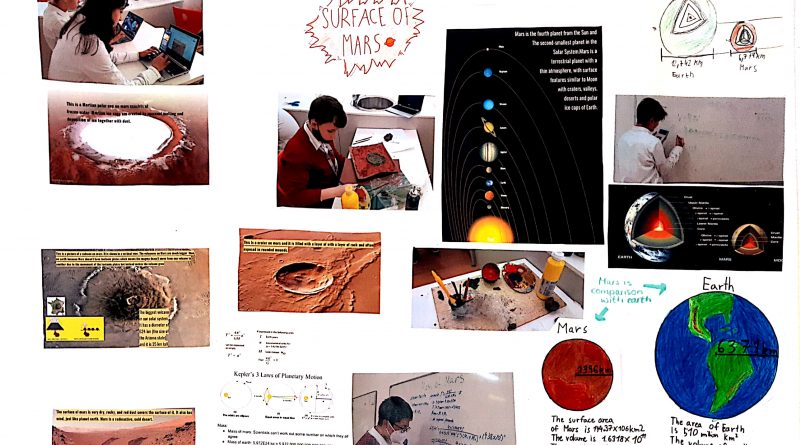 Science Week was held at the school last week. All MYP 1-5 and pre-DP students were divided into six groups: Mars 1 – 6. Each group chose its own captain, who was responsible for organizing a productive teamwork.

Monday, 11/22, began with a video Building a Mars-base is a Horrible Idea: Let’s do it!, a kind of introduction to the topic of the upcoming study. Later, the groups “Mars 1” and “Mars 2”, together with the teacher Ms. Suvi, found out how much and what kind of food the astronauts would need during the flight. Taking into account the required daily amount of energy, proteins, fats and carbohydrates, the students made a menu for 7 days. It turned out that for 250 days of flight, 50 people will need at least 6.5 tons of food!

Groups Mars 3 and 4 studied issues related to the history of Mars exploration, its general characteristics. Using Kepler’s third law, the students learned to determine the masses of celestial objects and mathematically calculated the mass of Mars, 6.44 x 1023 kg (David, Matyas).

At the same time, the Mars 5 and 6, together with teachers Ms. Jana and Ms. Merna, began designing the future colony, taking into account information about its atmosphere, radiation, water resources and relief.

The next three days were spent in hard work. The study of one problem led to the emergence of new problems. So, studying the temperature regime of the planet with a teacher, Mrs. Geova students of Mars 5 faced a problem: How to warm the planet? (the average temperature on Mars is -630C). There were several options:

– to create many installations that produce greenhouse gases, including freons (Alexi, Rebeka)

However, having answered the main question “Why is it so cold on Mars?”, the students came to the conclusion that heating the planet means creating a dense atmosphere around it (Victoria – Mars 6). Otherwise, the solar wind will carry gases into space every minute. But then a new problem arose. To preserve the atmosphere, it is necessary to create normal gravity (on Mars, gravity is almost 3 times less than on Earth) and a magnetic field, which is practically absent. The question arose “How to increase the gravity on Mars?”

Students Denis and Sepanta, Mars 5, proposed to put a large moon in the form of an asteroid into Mars orbit, or to combine Phobos and Deimos. This raised new questions: How much mass should the new moon be? What should be its orbit? How to get the cold and hard core of Mars to spin again? How to create a magnetic field for the entire planet? Do we have such technologies now?

The Mars 4-6 students decided that perhaps they should start by creating local gravitational and magnetic fields just around the base. It is clear that all the reasoning was theoretical. However, most discoveries start with theory.

Victoria, Will and Yutong proposed using a system of living quarters of colonists moving in a circle with a radius of 0.5-1 km using a nuclear power source. This movement will create centrifugal force, which will create gravity. The students ruled out the possibility of using a centrifuge on Mars, because it must be very large to exclude a negative impact on human health, and therefore heavy.

Oliver, Mars 4, offered a different solution to the problem. “We know that there is a magnetic field around the electrical wire. And what if the living quarters were wrapped in tubes through which current or other charged particles would move. There is a lot of carbon dioxide in the atmosphere of Mars. If we know how to turn it into ions, then we get what we want. The magnetic field will protect against radiation, and the force of gravity will help keep the body healthy.

Teams Mars 4-5, together with teacher Mr. Ray, studied the impact of weightlessness (during flight) and insufficient gravity on the planet on the health of colonists. They developed exercise complexes with weights that can help slow the loss of muscle mass and the destruction of bones and blood vessels.

Another problem that the students tried to solve was the problem of the lack of oxygen on the planet. Students’ suggestions for where to get oxygen were different:

– Obtain oxygen from cyanobacteria and plants, for example, chlorella was suggested by Adela, Sasha, Anna – Mars 2.

Together with teachers Ms. Maria and Mr. Ollie, the students tried to create an analogue of the Martian soil and studied the possibility of growing and cultivating plant seeds and the plants themselves. The result was negative. Everything was lost. There are many perchlorates in the Martian soil, which are toxic to living organisms.

Students began to look for an answer to the question: How to clean the soil from perchlorates and found it. Scientists at the University of California, Riverside have created a catalyst based on sodium molybdate, bipyridine, palladium and hydrogen that can solve this problem. As for hydrogen, it can be obtained from water. There is enough water on Mars (especially at the poles). In addition, water can be obtained by the Sabatier reaction (Victoria, Filip- Mars 6).

During all these days teachers Ms. Lisa and Ms. Bronislava took care of the psychological comfort of future colonists. They organized and conducted several psychological workshops for students on self-management and conflict resolution in conditions of prolonged isolation in small groups:

– how to avoid stress

– how to control your emotions

– how to avoid depression by living away from family.

The issue of organizing a business on Mars was also not left without attention. Together with the teacher Mr. Ilias, the students have developed several projects: Mars Dust Inc., Ad Astra (Radovan, Viktor).

In four days, 23 projects were created. On Friday, November 26, new 9 groups were formed and the students were given the last task – to summarize the collected material on certain topics and present the final projects.

The teacher’s jury (Ms. Lisa, Ms. Maria, Mr. Ilias) and the student audience not only listened attentively to the performances of the teams, but also actively asked questions. Each student showed a high level of understanding of the topic.

While the jury summed up the results and determined the most active and successful students, Ms. Suvi organized the Blooket online quiz about Mars.

At the end of the day, Mr. Jaymes asked the students to answer the question: Is it good idea to colonize Mars?

Several students responded that Mars could be good for business, waste storage, heavy industrial use, and the production of toxic substances.

Most of the students answered “No”. “Mars is uninhabited” (Alexi). “Mars requires a lot of money” (Miro). “It is better to cleanse our planet and take care of it” (Peter).

Was Science Week a productive and meaningful event for students?

Let’s answer with the words of Hugo ( Mars 4): “I learned to think broadly” … 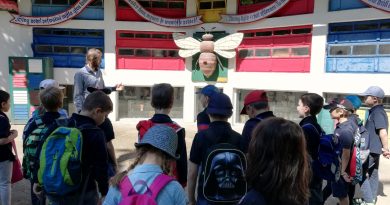 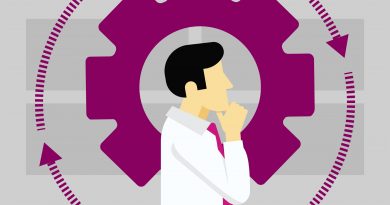 Why being reflective is so important in the profession of teaching? 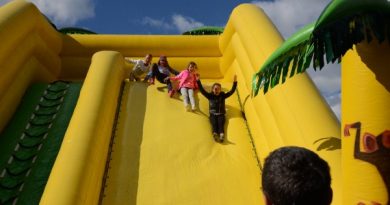